Dish of the day

Microsoft's best-kept secret has just impressed the hell out of me yet again.

For the last seven years I've been using Windows Media Center Edition (MCE) for all my telly and telly-recording needs. Back in 2006 I bought a USB remote control, stole a USB Freeview dongle from Jim, and plugged them both into a hand-me-down PC.

It all worked brilliantly until the recent high winds reconfigured my receiving apparatus: Rather than muck about with ladders in tornado season, I decided to do away with the aerial. I swapped the Freeview tuner for a FreeSat version and plugged it into a Sky minidish I'd rescued from a skip.

It's been twenty years since I installed a satellite dish; back then you either needed to peer through a window to see the signal strength on a telly, or have an accomplice yelling directions as you waggled the LNB back and forth.

With MCE, all I needed was a phone and a broom.

Since my satellite receiver is a PC, it can share its screen anywhere - including mobile devices - so I could watch the signal strength in one hand while whacking the dish with a broom handle from the comfort of my patio: 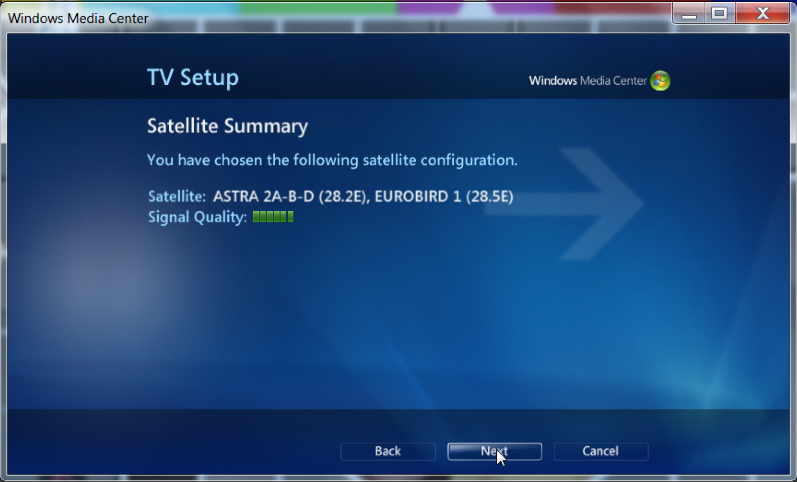 "Yes Sean", I hear you saying, "But normal people prefer to get a professional in, as opposed to playing parabolic patio piñata."

True. But that wasn't the best bit. The best bit was this:

Once MCE had found all the FreeSat channels, it immediately started recording Big Bang Theory.

With no effort on my part, everything I'd told it to record off the aerial - every season pass I'd accumulated in the last seven years - was scheduled to record from the dish instead.

You can see why Microsoft would never want anyone to know about this, can't you?